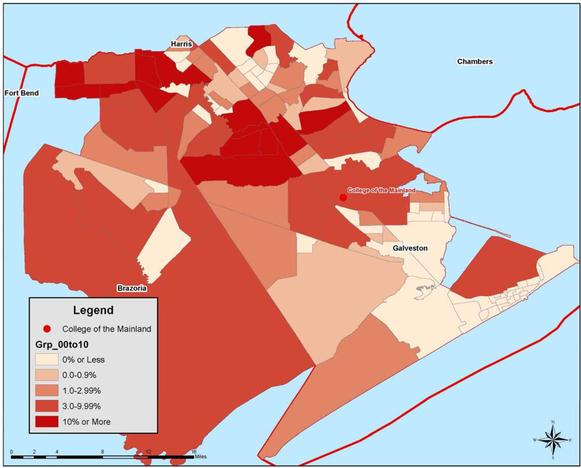 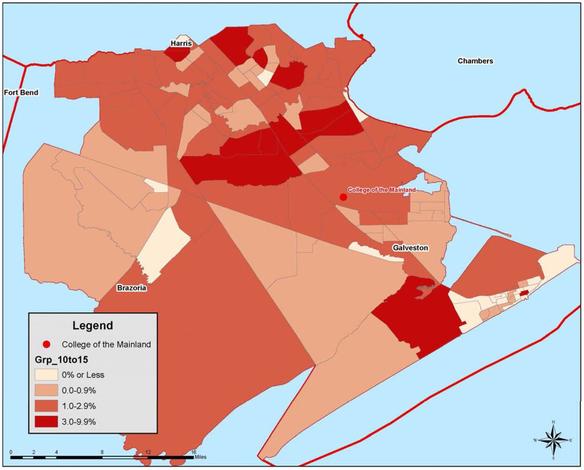 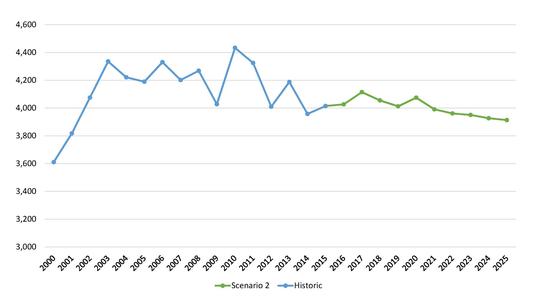 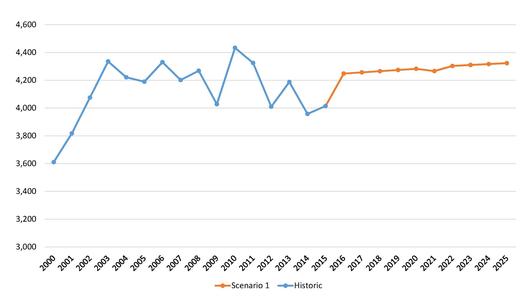 The College of the Mainland service area has experienced sharply bifurcated historical population growth with rapid growth correlating to proximity to Harris County and the employment centers of the City of Houston area to the north. Between 2000 and 2015, subdivisions on the Harris and Galveston/Brazoria county boundary with access to the major highway corridors have experienced rapid growth. These areas include Friendswood and Clear Lake (along IH-45) and Pearland (along SH 288).

Census tract projections for 2015 – 2025 for the primary contributory population (ages 18-64) suggest the rate of change of population growth is slowing, especially in the Pearland area, but the majority of future population growth will remain in the northern third of the service area.

​Physical proximity to a community college affects attendance. Data from a wide variety of community college districts throughout Texas confirms that convenience primarily to residence and secondarily to workplace correlates to enrollment and capture rates. The Clear Lake area, Friendswood area, and subdivisions immediately south of the Harris County border, show student enrollment concentrations, but with declining density moving north with additional distance from the COM Main Campus. Analysis of demographics and enrollment suggest that - to maximize enrollment - a significant “presence” is required in the north portion of the district.

The College of the Mainland effectively serves a diverse student population where approximately half of the student enrollment is white. Hispanics are both the fastest growing segment of the population and the fastest growing group of students. But the need for higher education across demographic segments is evident. Only approximately one-third of the population has completed an associate degree or higher level of educational attainment.​

Demographers use home sales and subsequent household creation as a primary indicator to project enrollment for all levels of education. The traditional methodology is driven by four contributory factors: housing starts, closings (or sales), vacant developed lots (available lots within subdivisions), and future lots (usually subdivisions that have been platted but do not yet have infrastructure). Starts and Closings measure the current year supply and absorption. Vacant Developed Lots and Future Lots allow a look into the future. While ultimate sales are primarily influenced by the health of the economy, the two measures offer the current lots available to homebuilders and the proposed future supply of lots as indicated by developers.

2015 Annual Closings are dominated by subdivisions along the Interstate Highway 45 corridor, generally on the northern boundary of the COM service area. The Highway 35 East submarket with 810 Closings (Friendswood area) and the Clear Lake Area submarket with 774 Closings combine for almost 1,600 closings. In comparison, the Dickinson/Texas City submarket had 121 Closings. Vacant Developed and Future Lots suggest the vast majority of future growth will remain in the Friendswood and Clear Lake areas (far northern portion of COM service area). These two submarkets combine for almost 4,000 in inventory and 11,000 vacant developed lots. In comparison the Dickinson/Texas City submarket has 204 houses in inventory and 1,122 vacant developed lots.

​ECONOMIC INDICATORS IN COLLEGE OF THE MAINLAND SERVICE AREA

The College of the Mainland taxing district generally includes the mainland portion of Galveston County with the exception of the far northern portion of the county (immediately south of Harris County). Income and housing data generally describe stable, middle-to-upper-middle class communities with a relatively high level of home ownership. The two largest household income groups are $50,000 - $74,999 (17.2%) and $100,000 - $149,999 (17.2%). Almost 70% of housing units are owner occupied with an average length of residence of nearly 14 years. After a surge of housing construction between 2000 and 2009, when almost a quarter of all housing units were constructed, new construction has slowed to match earlier decades.

Only approximately one-third of the population has completed an associate degree or higher level of educational attainment. Roughly half of the population are high school graduates (22.6%) or have “some college” (24.0%) education. The private sector employs approximately three-quarters of all workers, one-tenth (8.1%) are self-employed, and roughly 15% work for local, state or the federal government. Fastest growing industries and occupations are dominated by health services. The two fastest growing occupations are nurses and the category of nursing aides, orderlies, and attendants. Declining industries and occupations are dominated by low-education manufacturing professions.

The 2000-2010 Growth Rate Methodology projects enrollment based on extrapolation of a historical period of relatively rapid growth for the college. This scenario illustrates a potential growth rate based on historical demonstrated performance.

The THECB is a State of Texas agency charged with gathering and measuring statistics related to higher education as a basis for policy and funding decisions of the Texas Legislature. The THECB generally projects enrollment growth based on historical credit enrollment and broad trends in population. This scenario reflects the enrollment goal established by the THECB for the end of the decade extrapolated to illustrate the projection period of 2015 – 2025. 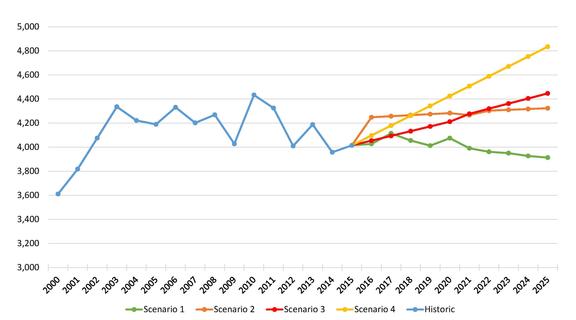 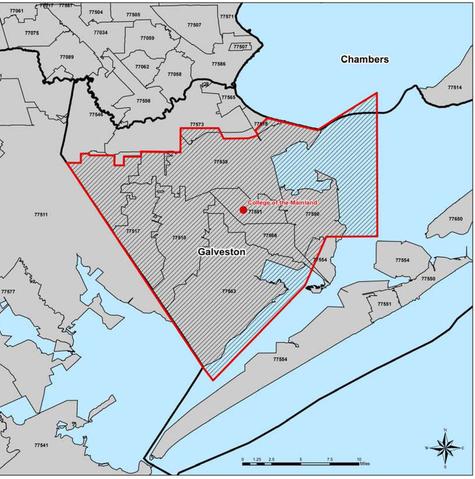 Enrollment projection trends suggest without physical or programmatic improvements, even with population growth, enrollment may continue to slowly decline. Capture rate analysis, which projects enrollment by capturing the potential of population growth by geographic areas, suggests the college has growth potential, but higher growth rates (demonstrated in earlier historical periods) will require physical and programmatic improvements. 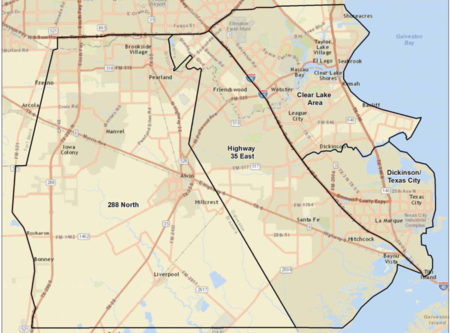 Every measure of future growth within the College of the Mainland District suggests growth will be concentrated in the northern portion of the district (immediately south of the boundary with Harris County, adjacent to IH 45 corridor). The projected population growth is dominated by areas around Clear Lake and Friendswood. The area around the campus, primarily Texas City and La Marque, is projected to grow, but comparatively slowly. The college enjoys a demographic “tailwind” but it is largely concentrated well north of the main campus. This suggests enrollment growth for the main campus location will need to be driven by physical and programmatic improvements that draw more students. The college doesn’t have the luxury of relying on contributory student population growth to achieve faster growth rates.​

The THECB is a State of Texas agency charged with gathering and measuring statistics related to higher education as a basis for policy and funding decisions of the Texas Legislature. The THECB generally projects enrollment growth based on historical credit enrollment and broad trends in population. This scenario reflects the enrollment goal established by the THECB for the end of the decade extrapolated to illustrate the projection period of 2015 – 2025.

To better understand how demographics are likely to impact the future requirements of the College of the Mainland (COM) and provide a basis for strategic decisions, analysis was prepared in collaboration with a demographer. Areas of focus for the data gathering and analysis include economic indicators (income, occupied housing units, educational attainment, employment, growing and declining industries and employment, new single family homes), historical and projected population (by census tract), as well as student residence and ethnicity. The data and analysis then provided the basis for four enrollment projections, each illustrating different potential enrollment growth scenarios. 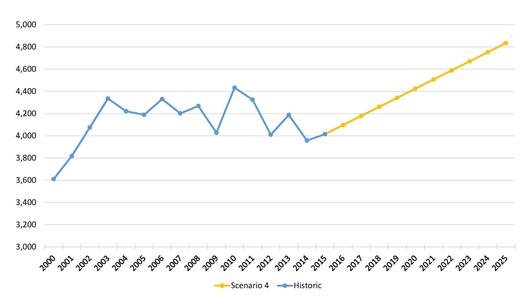 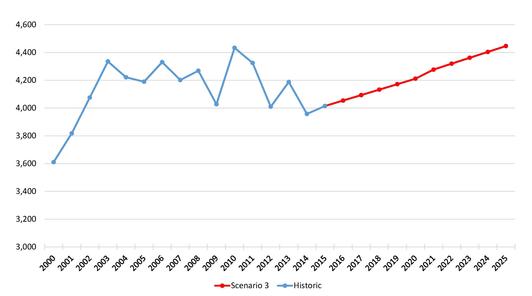 The Census Tract Capture Rate Methodology projects enrollment growth based on the enrollment capture rate for the 18 - 64 target population in the Top 23 zip codes. The methodology holds the capture rate constant and “grows” the population for each census tract. This allows projected population growth to be reflected in the enrollment scenario. The difference between scenarios 2 and 3 could be described as the demographic opportunity given the college by the underlying growth in the area population.